The owner of the home suspected paranormal activity in her home and asked our team to investigate. Owner of home claimed that she has seen an apparition of an older man dressed in overalls standing in the doorway of her bedroom. The apparition spoke to the owner, called her by name, and told her it was "time for her to wake up". This apparition was  also seen by the owner's sister.  Objects such as keys, cell phones and other every day items,  have been moved in her home and found in unusual locations. Attic door will fall open even though the latch is in closed position. She has heard voices having conversations in her living room while she was home alone. Other claims were: moans and child-like screams coming from upstairs bedrooms, feeling of an unseen presence by all members of the home, and tools used in the home being taken and moved to a different location. When owner was cursing, a broom smacked her in the back of the head. A lunch pail and chair have knocked  over without any explanation. Family members have heard sounds of something  breaking  in the laundry area and when checking nothing appears broken.  Even though these activities occur, the owner always has a strong sense that she is being protected. This home has been in the family for 70 to 80 years.

During the investigation, we found no evidence of paranormal activity on the audio playback that was recorded during the EVP session. Nothing was captured in the digital video taken, nor did any of the team have any personal experiences while in the home.

During the examination of our photographs, we found what appeared to be ( in the first photo) a face of an old man. Green orbs are visible in the second photograph and we were unable to determine an actual source. A white mist in the third photo, which seems to flow out of the upstairs window of the home, was also unexplained. None of these images were witnessed by our naked eyes, just in our photos.
We will be returning to the house for further investigation. 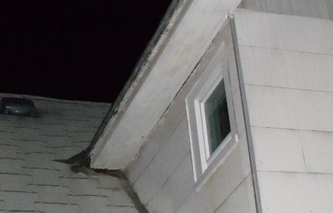 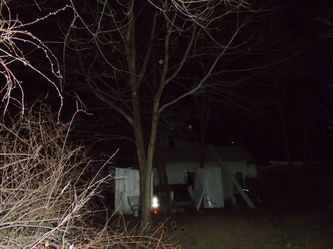 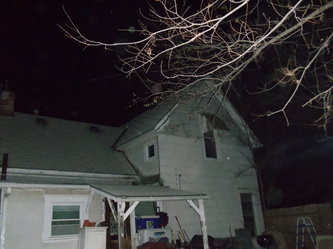